The Battle of Misconception

I’ve fought the battle at least five times in the past year, and it ain’t been pretty.

The email comes: “I need to talk to you after school in my office.” I know exactly what my principal wants. It seems that parents are calling in a panic to know why their student has to buy a pig for a welding class. I respond with the same question. 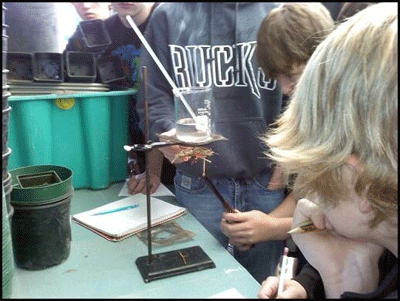 Then the conversation goes round and round, me arguing the merits and the importance of the three circle approach to agricultural education, and my principal vehemently disagreeing. The last time around, he had the memo from Dr. Case, himself sitting on his desk, federal laws integrating FFA and SAE into the curriculum, and he still argued that I cannot make FFA part of “the class.” “Some parents can’t have animals” is inevitably uttered at some point during the conversation.

I am countering that in several ways. I have re-instated a strong advisory committee who is very interested in what we are doing through our AST program. The group includes not only traditional members, such as farmers and ranchers, but also college instructors, local agribusiness professionals, and government employees. I’ve strategically sought out those with a little political pull in the community and with the school board, as well. They are truly the stakeholders in our educational program, and I have found that it is really important to have them on the side of our students and agricultural education.

In addition, I have put together an Alumni chapter that is small but powerful. They have accomplished some things that have offered our students opportunities not found in other academic areas. For instance, one student will attend WLC because of the Alumni chapter and some of their successes. They helped put on our banquet, which turned out be a first rate affair, and the success has drawn several more members, as well.

The thing that both of these groups have in common is that they believe in what Agricultural Education, including FFA and SAE, can offer our students. They’ve either been members, or they have seen or employed former members, and they are believers. The more of those believers we cultivate, the more successful our programs will be.

My principal truly means well, and when I told him to name one bad thing FFA does for kids, he responded with the good it does. Our chapter has shown him that with the multitude of newsworthy activities in which they have participated. One example is our Farm Day, in which we invite all of Pendleton’s first through third graders to our land lab, and students man educational stations that teach students everything from swine production, to soils, to crops, and even rodeo. Students develop flyers to hand out at each station, and the rave reviews from teachers trickle their way to our building administration. Those are the types of landmarks that make believers.

I believe if we can truly integrate FFA and SAE into our classrooms, and use whatever tools we can, be it Alumni, Advisory Committees, or Professional Development, to help develop those students into the best they can be, we’re doing all right. And I know next time I get that ominous email, the battle will go even better than it did last time. Slowly, but surely, I’m getting him trained.